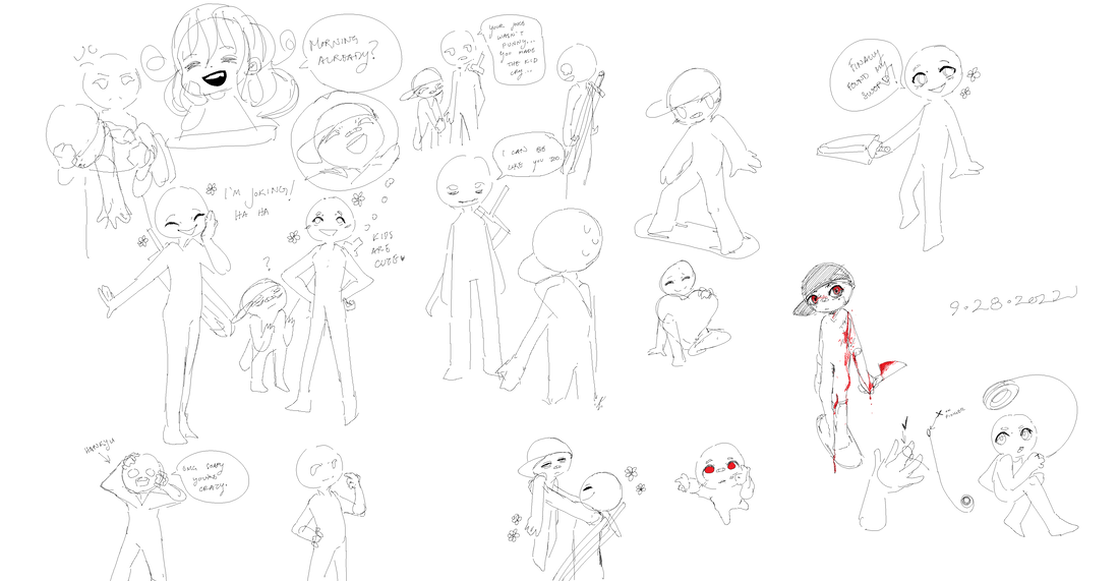 $6 Patreon Reward - "Sopple Sketch" -- Click on the image to go to my Patreon!

Thank you for watching "Skid vs Larry"!

I am very happy to receive the reviews on it, and even more so to finally get it off my chest, after working on it for over a year. Unlike with "vs One," I was not as confident in releasing this animation, despite my own improvements since the last animation. Because of this, I am very grateful with the support I am receiving. Thank you, from the bottom of my heart.

I have also seen some questions that pop-up often when reacting to the animation. So, I hope this FAQ will satisfy those who ask. I will also provide additional commentary to my answers in order to express my way of thinking when creating my animation. If you are reading this, I will assume that you have already watched it, so you should already know that there will be some spoilers ahead:
Q: Who is "Larry"?
Larry, the teal stickman, is a Dojo Duelist by its animator, Shuga. You may find more information about his character in his Duelist Page. Knowing who the character "Larry" is very important for the context of the animation.

Q: Who is "Rens"?
As stated in the duelist page linked above, "Rens" is Larry's alias, used by his military group that he has now abandoned.

Q: Where is Larry's sword?
Normally, Larry utilizes a graphene sword to conduct and control his energy powers. In my animation, he is missing his sword and is looking for it. My intention for this was to have Skid vs Larry take place sometime after Shuga's own animation, "Larry vs Yuno".

Q: Is this Dojo Duel official?/Where is Larry's part?
I am the only one making my side of the "duel," so this duel is not official. Skid vs One is my only official duel at the time of writing this, represented in the fact that there is a Duels Page with a poll vote. In this animation, I only asked Shuga to use his character, but not to duel.

Q: What does your animation mean?
My animation does have an intent as well as certain and multiple types of symbolism behind its creation. However, I firmly believe that as the creator, it is not my job to interpret the story. It is only my job to tell it to you. I also think it is fun to listen to everyone's interpretations. There won't be any discussion if I give a solid answer.

Q: How come you resurrected Larry at the end? Won't it make his death less impactful?
My original intention was to give Larry a permanent death due to this reason. After I thought about it for many months during the production, I made the decision for him to be resurrected for the following reasons:
1. I thought it would make some people too distressed.
2. Shuga may want to continue Larry's story in the future, and I would like to respect his lore. Although my animation can be seen as an "alternate timeline," I think many people are more interested in how different stories connect with each other. I would like to value this connection in my story as well.
3. In Larry's normal depictions, he is seen widely out-performing his opponents. I thought it wouldn't make sense to have him easily lose to a little kid like Skid. This gives better representation to Larry's character, to have him willingly lose to Skid instead.
Having it so he was still alive was the better decision in my opinion. I made Larry mention it briefly at the end so it softens the impact on the viewer, while also retaining the impact on Skid's character. He is not supposed to know that Larry is alive.

Q: How did you use Blender for your animation?
I animated all the "stickmen" first within Flash, and then exported it as a png sequence with a transparent background. From there, I imported the png sequence as an animation on a plane in Blender. To learn this, I watched this video by Toniko Pantoja. Then, I parented about 50 cameras to 50 animation planes in Blender, all on essentially the same file (there was probably a better way than doing that, in hindsight). For each scene, I eyeballed the 3D background to match with the existing animation. In my opinion it is highly unconventional to eyeball camera movements of the character to the background, and most animators will more likely animate the camera movement with the background first before animating the characters. However, this way of doing it better matches my somewhat chaotic workflow, so I enjoyed this process.

To create the city, I first made the city map by going to a map generator and importing the generated map into Blender. Then, I played around with the shaders menu to get the image textures that I wanted onto the buildings. I learned this from watching this video by Allan Parker. This also took me a couple of tries.

Compositing for the fight part of the animation was also built into Blender. It is just a simple chromatic abberation effect using a lens distortion node with "jitter" enabled, and I learned it from this turbulent tutorial by CGMatter.

Other than that, the rest of learning Blender was a lot of trial and error, as well as dozens of random tutorials I furiously looked up while trying to make the program do what I want. I am glad I can use it more often, but without a doubt I have a lot to learn when using Blender for my projects.

I hope that this FAQ gives a better understanding of my thought process when creating this animation. I will update it if I get more questions, but for now, that's it!

If you would like to support me and my animation, consider checking out my website's homepage by clicking on that pretty, pink logo at the bottom. Feel free to visit my shop as well if you want some merch that I worked very hard on. Cheers!